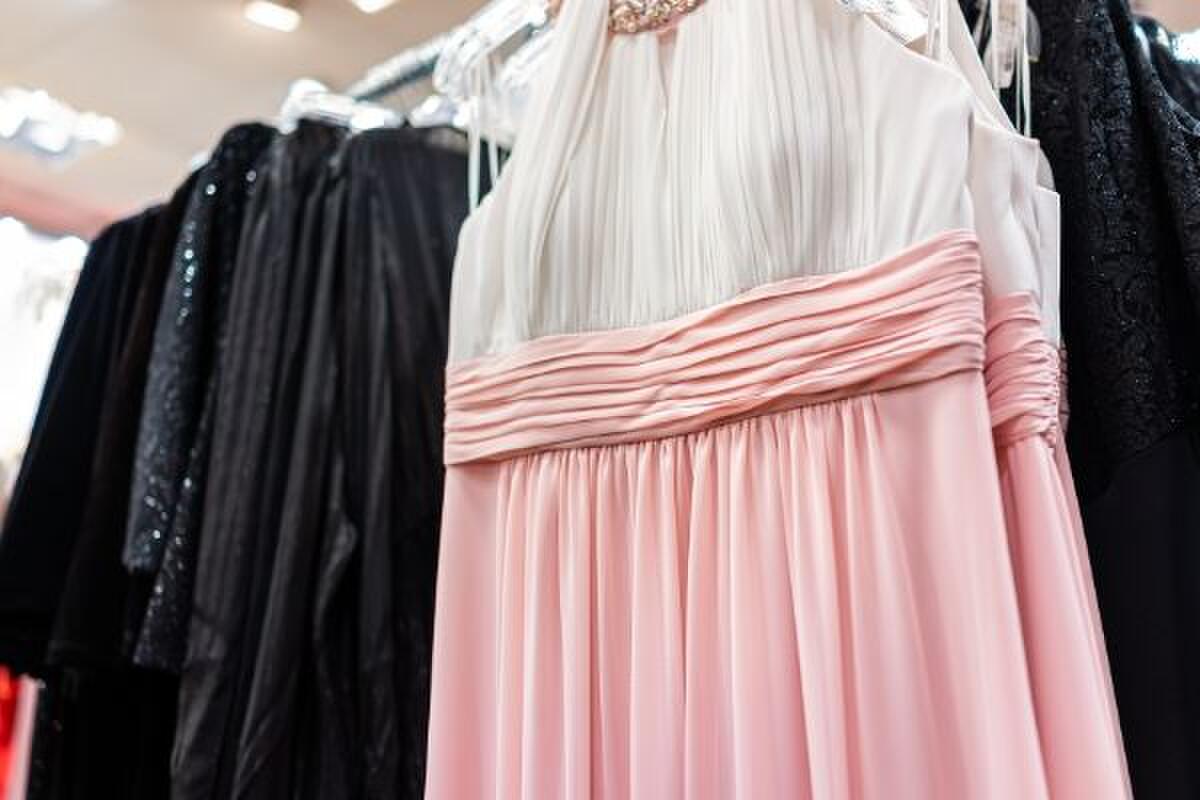 Prom styles come and go, and come again. Although 2020 will be remembered as the year of the canceled prom, a look back through the history of prom styles through the decades provides some fun diversion from disappointment.

High school and college proms have been a thing since at least the‘’30s. That is the first decade for which there is substantial photographic documentation of formal school dances, so that is where we’ll begin our survey of styles, hemlines, waistlines, shoulder styles, and necklines.

In the ’30s, young women opted for slinky styles and sumptuous fabrics. Possibly influenced by movie star looks (sound familiar?), strapless or shimmering dresses with shoulders demurely covered by beaded cardigans or velvet gowns with dropped waists might be seen on the dance floor or in the receiving line. Yes, receiving line. At a prom.

Wartime shortages meant fabric was in tight supply, so prom dresses tended to keep to narrow silhouettes. Oddly, enough fabric was found for sleeves and covered bodices. Modest glamour was the order of the day, and young women got creative to make do with limited supplies.

Did we mention how looks come and go and come again? The 1950s was the heyday of the fit-and-flare look, which actually started with the Dior’s postwar “New Look” celebrating the (perceived) end of fabric shortages with huge flared skirts beneath fitted, covered-up bodices and supported with crinolines. In the ’50s, the fit-and-flare look found variants with ruffles and tiers (did someone say tiers? See this year’s designs) or sashes accenting cinched waists. Bodices may have bared the shoulders, but young women covered them up again with shawls or sweaters. Waltz- and tea-length dresses predominated.

In the late ’50s, the “flare” part of fit and flare took on a more rounded shape, and the “bubble hem” dress was born. In the early ’60s, the volume in the skirt shifted to the hair. How many hours of teasing and how many pounds of wig did it take to create those bouffant and beehive hairdos? Waistlines began to migrate up until the late years of the decade when the empire waist was in full force. While the sheath had a moment in the ’60s, the empire style with a modest bodice won the decade.

Much as we’d like to forget, the ’70s happened. Nothing says “frump” quite like an eyelet lace peasant dress, a synthetic polka-dot frock that looks like your granny’s nightgown. “Hippie” prom-goers wore flowers behind their ears. The baby-doll had a nanosecond when Twiggy showed up, but seriously, a micro-mini and thigh-highs at a dance? When the only reasonably stylish prom gown of the decade was worn by Carrie White, right before the pig’s blood fell and she unleashed hell, you knew you were living a prolonged fashion nightmare.

Molly Ringwald did her best to redeem polka dots in pink, and everyone else tried to forget Carrie under mountains of ruffles and big hair. We have Madonna and Cyndi Lauper to thank for the return of tulle with greater volume than the demure treatments of the ’50s. Madonna devotees also brought back the short pouf, and plenty of it, to match that big, crimped hair. Working girls began to wear shoulder pads, perhaps as a power play during a breakout decade for professional women.

OK, enough with the shoulder pads already. When prom-goers finally got over the linebacker look, they couldn’t seem to figure out what to do with their shoulders at all, so off-the-shoulder styles came in and spaghetti straps came back. Then halter styles, then strapless again. What the heck was going on here?

Satin dresses took over in the early 2000s, and decorative touches like floral appliqués, bows, and sashes disappeared. Then the lower half of the bodice also disappeared with the advent of the two-piece prom dress. Young women who wanted to observe the trend without baring their bellies opted for a longer, but still separate, bodice. There seemed to be a reaction to reduction in the late years of the aughts, with candy-colored princess dresses exploding from limos in clouds of tulle (tulle again!). Don’t try this unless you want to look like your fairy godmother turned you into a giant pink or yellow Peep.

By now we’re getting a little seasick riding that swinging pendulum of prom styles, but maybe it was the giant princess gowns that directed some young women back to their mother’s closets. Gowns from the past demonstrated a devotion to sustainability as movie stars and prom-goers alike proved that wearing vintage, repeatedly, is a value, and that classic gowns hold up to the passage of time just fine.

2020s What We Would Have Worn and Will Wear Again

Cancelations can’t quell creativity, and online proms still call for fabulous gowns. We covered this year’s trends in a separate post on evening dress trends that touched on tiers, ruffles, polka dots, and—whoa, crochet? Yes, while the ’70s had their eyelet lace, the ’20s have their crochet. Metallics and ombré colors came on strong this year as well. To see all these trends in a single collection, peruse our MNM couture dresses; these provide the full range of versatility, including trendy evening jumpsuits, for any event, even a 2020 online prom or gala.

The modern woman is free to choose from both new and retro styles to find the silhouette that flatters her figure best. Elegant eveningwear enhances a woman’s natural beauty. The best gowns defer to their wearer. Choosing the right dress for the body that wears it puts the woman in control of the look. A dress that overwhelms its wearer is simply the wrong dress. At Effie’s, we offer a deep selection of styles, fabrics, and lengths, plus accessories that complete any evening look. Whether you want to echo prom styles through the decades or show off something completely new, Effie’s has the dress for you.